During a recent hike up near Tom’s Thumb, I spotted dozens of Marine Blue (Leptotes marina) butterflies. They feed and host on plants in the pea/legume family (lots of that up there). I tried for almost half and hour but this is the widest any of them opened their wings. 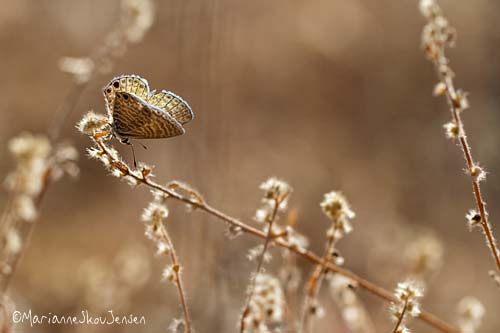 This was my first sighting of an American Snout. Check out that schnoz! No luck on getting a shot with open wings but now that I know what to look for, I’ll be ready. 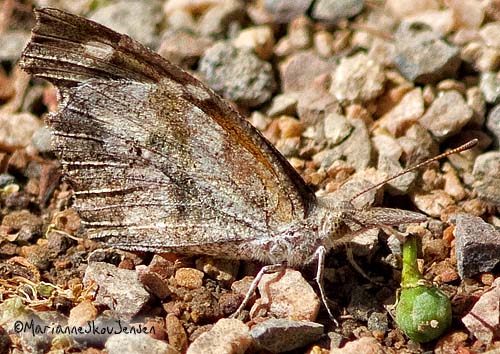 This will give you an idea of how small they are. That’s decomposed granite and tiny olives. 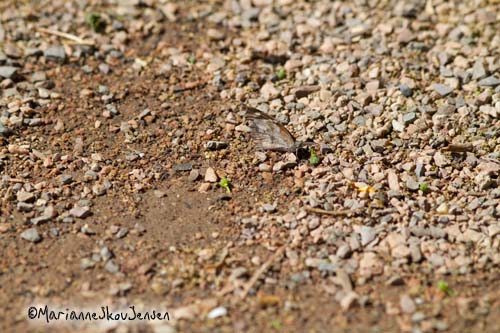 I joined the CAZBA last year in an effort to learn about the butterflies I see in my area. I especially wanted to learn what their host plants were so I could plant them in my yard. I was very happy to find out I already had many! As it turns out, though, the the main thing I’ve learned is how many butterflies are so small that most people (including me) have never given them a second glance! Not that I haven’t seen them flitting around but I just assumed they were tiny moths.

One such butterfly is the Dainty Sulpher Even with its wings spread, it only measures 3/4 to 1 inch wide! Here’s what my 300mm lens picked up. (Next time I’ll try it with 1.4X teleconverter). 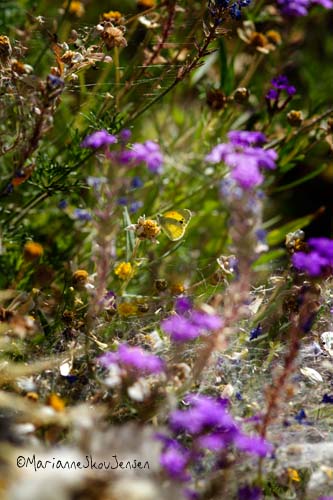 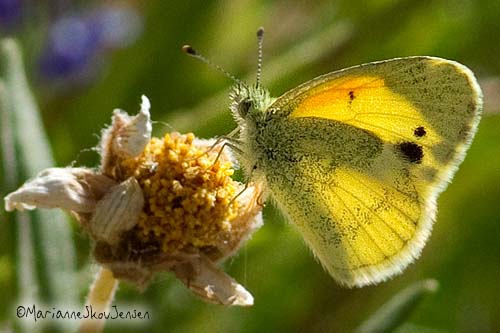 I’m going to Boyce Thompson Arboretum for a butterfly walk tomorrow morning and I’m hoping to capture a shot or two of Pipevine Swallowtails like this one I got in the same place back in May of 2004. I remember this image vividly because it was one of the first shots taken with my new Canon 1D MKII. It was overcast and raining off and on that day which resulted in the soft lighting. 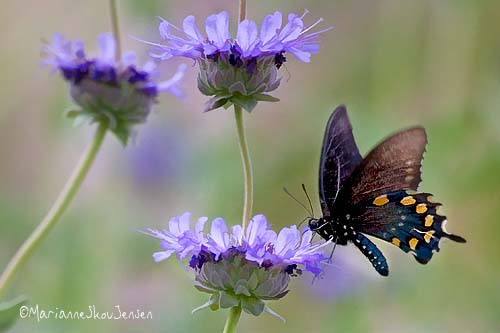 The cardinal rule of Landscapers is “locate all utilities and water lines before digging”. As it turns out, I broke that rule when I put in the fence posts. I was SO sure I knew exactly where all the irrigation lines were that I didn’t uncover many areas before hammering in the posts. Thankfully I only made one mistake but it cost me the whole morning because I had to go to the irrigation store and buy a connector. (I bought 3 just in case). 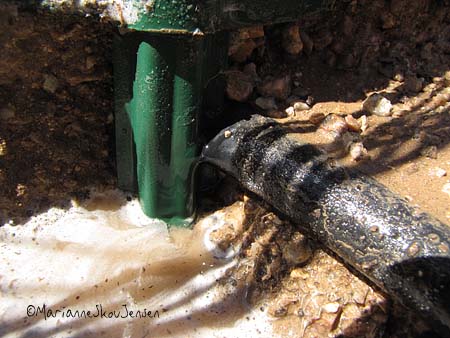 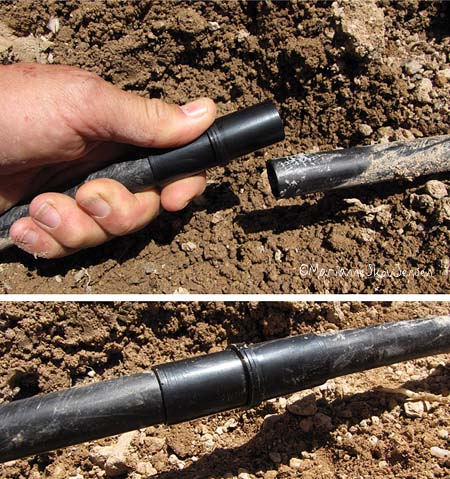 Besides my irrigation photos, I got some critter shots yesterday. The first is a Pygmy Blue Butterfly (fairly sure). Dozens were swarming around the water soaked ground. They would land momentarily to get a drink but they’re SO tiny (less than half inch) that it’s tough to focus on them. My little Canon SX10 did a great job, I think! 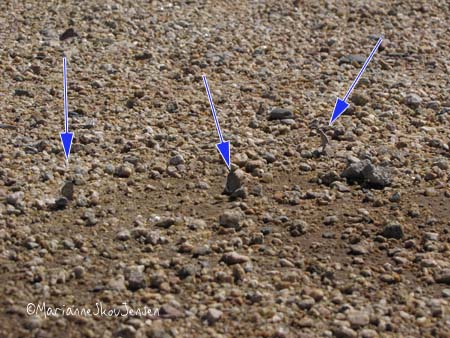 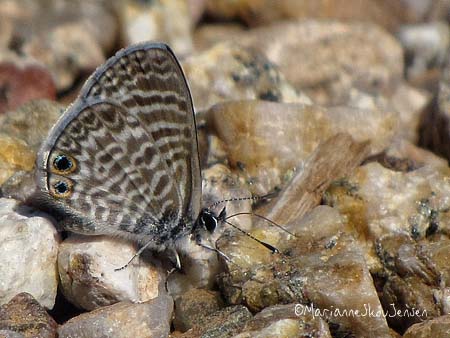 The grab shot below is of one of our many resident Harris Ground Squirrels. It was probably one of their faces peeking out at me last week when I uncovered its burrow. They are often mistaken for chipmunks because of their stripe. 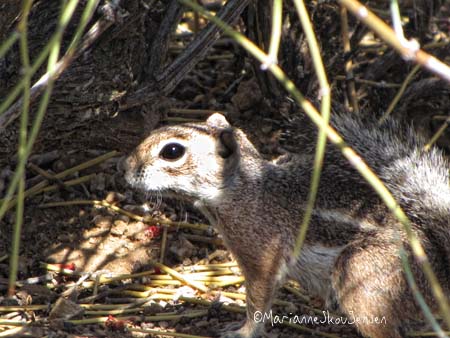 Another first sighting for me. This time it’s a native Dalea which goes by a couple of names: Marina dalea (was Dalea parryi). A bonus was finding a tiny hopper staring at me.


After seeing the insect on the Dalea, I started looking for others and found a little Crab spider on a New Mexico Thistle next.

One of my last photos of the afternoon was the prize of the day! The plant is Odora (Porophyllum gracile) and I think the butterfly is an Azure Celestrina. 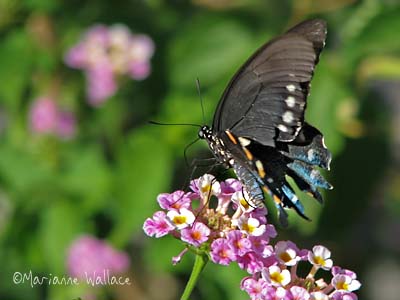 I’ve been seeing lots of Spicebush Swallowtails but have yet to get a shot with wings spread. This was taken hand held with my point and shoot. 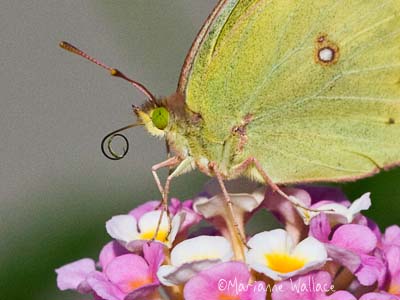 Cloudless Sulphur butterflies showed up a day after the Skippers. 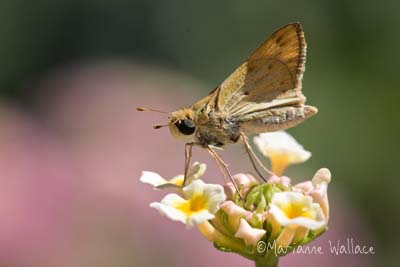 These tiny butterflies caught my eye as I was passing by the dining room window yesterday afternoon. I’m 99.9 percent sure this is a Fiery Skipper (Hylephila phyleus). 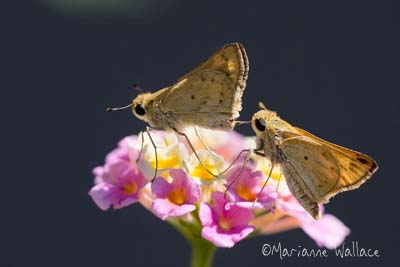 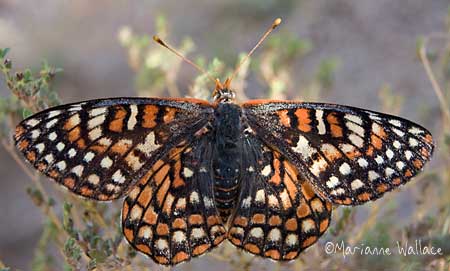 A friend and I saw dozens of these little butterflies at Bartlett Lake yesterday afternoon. In researching the identity, I think it is a Chlosyne commonly called Checkerspot. It was less than 2 inches wide. There were others that were about one half in wide with similar markings. Males and females maybe? My friend and I were just happy that it held still long enough for us both to get a photo! 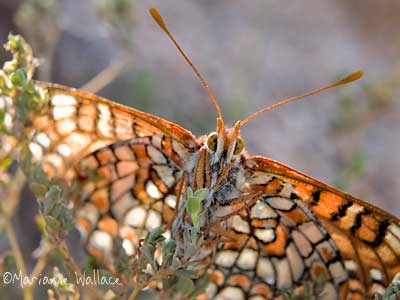